Fantastic new 20-suite lodge boasting superb contemporary style and luxury which enjoys a stunning location under the shade of the magnificent trees lining the banks of a permanent pool on the Selati river! 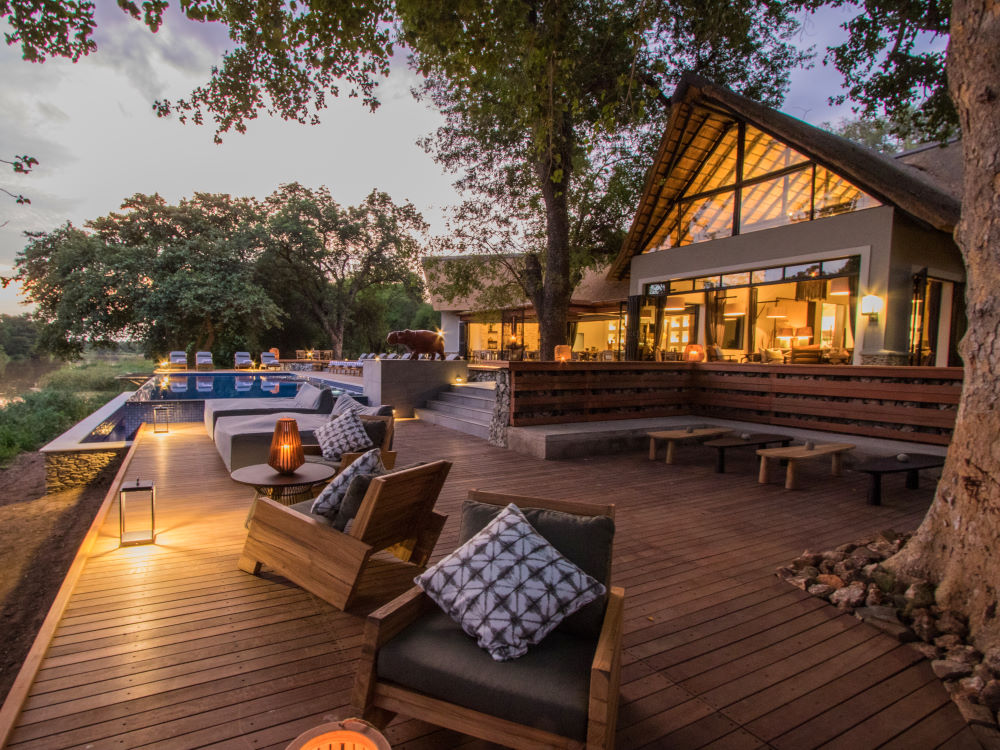 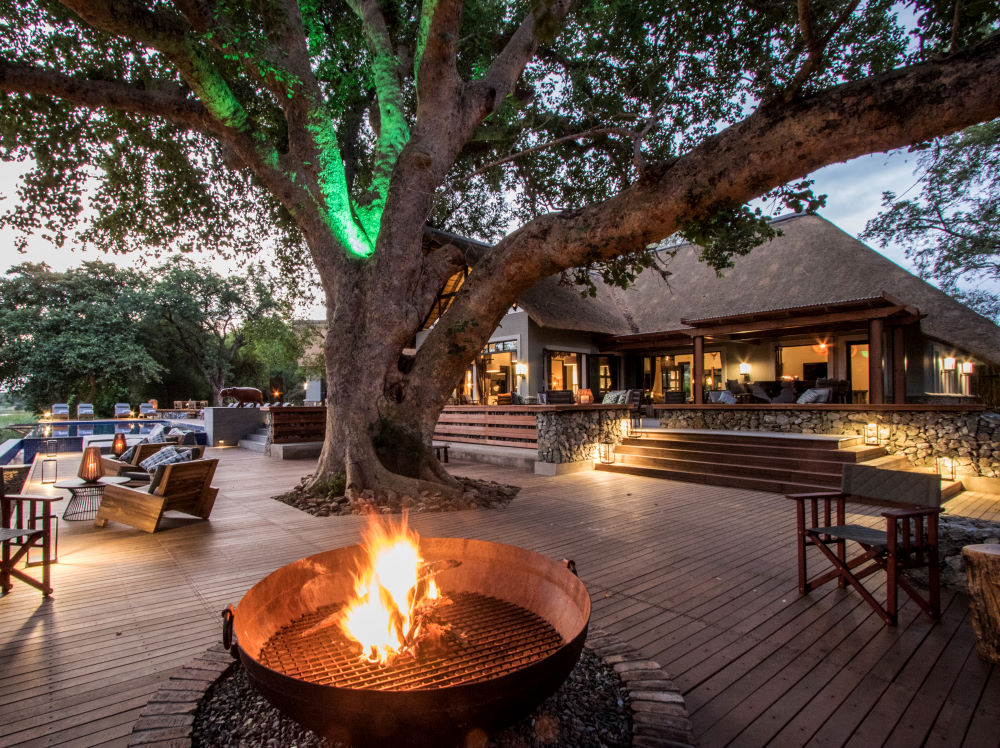 the gorgeous suites open out onto your own secluded, hardwood timber deck overlooking the river, where hippos provide endless hours of entertainment with their antics and noisy snorting

Fantastic new 20-suite lodge boasting superb contemporary style and luxury which enjoys a stunning location under the shade of the magnificent trees lining the banks of a permanent pool on the Selati river!

The Bushscapes team is always excited when a new lodge is launched, but what really gets our blood pumping is when a whole new reserve opens up! Which brings us neatly to the 15 000 hectares that is the new Abelana Game Reserve (located north of Hoedspruit/west of Phalaborwa, so an easy 5 1/2 hour drive from Gauteng)  The reserve boasts some of the most spectacularly gorgeous bushveld you’ll have ever set eyes on, featuring baobab trees and granite koppies as well as being bisected by a magnificent 10 kilometre stretch of the Selati river!

The “new” part of the description above actually relates to the fact that this reserve has only recently opened to paying guests. In fact though, this land has been under protection as a game reserve since the late 1950’s when it was known as the Solomons Reserve. Subject to a successful land claim back in 2010 when it was restored to the Mashishimale community, the community decided that conservation was the way forward and entered into a partnership agreement with some safari industry veterans to launch the reserve commercially as the Abelana reserve – “abelana” meaning “to share amongst each other” in the local northern Sotho language.

There are 2 things that really jump out at you about Abelana: firstly there is the wonderful scenic beauty of the reserve itself, whilst the other is the reserve’s gorgeous new flagship lodge, the 20-roomed Abelana River Lodge. There’s a wonderful contrast between the southern reaches of the reserve - which is dominated by rocky outcrops and koppies - and the northern area (where the River Lodge is located) which boasts what must be Abelana’s most memorable feature, a stunning 10 kilometre stretch of the Selati river that bisects the reserve.

Whilst the Selati would usually be dry most of the year, a series of weirs were constructed back in the 1950’s and these have created permanent pools of water which lie strung like pearls along the river’s length and also act as useful bridges enabling game vehicles to easily cross the river. The pools are home to resident pods of hippo and crocs and also provide permanent drinking water to multitudes of big and small game. Then there’s the magnificent trees of the riverine forest bordering the Selati’s banks – from leadwoods, to figs to jackalberrys – which are not just gorgeous to look at, but also provide the perfect territory for leopards keen to prey on the troops of baboons and vervet monkeys that love to forage here, not to mention the impala, waterbuck and kudu that are also attracted to the shade of the trees!

The Big 5 are all present and correct on Abelana as you can imagine, and the quality of sightings is steadily improving as the animals get more and more habituated to the sight and sounds of the game drive vehicles cruising the reserve. Abelana is also notable for boasting some of the more unusual species not often found in other reserves, like tsessebe, the mighty eland and the stunning sable antelope for instance!

As you might imagine, the birdlife here is prolific too, especially along the river where African spoonbill, saddle-billed storks and yellow-billed storks may be seen hunting for frogs and small fish along the edge of the water. If you’re lucky you may even spot a Pel’s fishing owl that’s known to frequent the stretch of river in front of the lodge! You’ll no doubt also hear the haunting cry of the African fish eagles that perch in the trees along the river on the lookout for signs of prey in the waters below.

The deepest stretch of water along the Selati is where you’ll find the 20-suite lodge that is the flagship of the reserve, the stunning new Abelana River Lodge. Located on the northern banks of the Selati river, the lodge was opened in late Feb 2020 (just in time for the coronavirus that almost immediately forced its closure!) Located on either side of the beautiful main public areas – consisting of a gorgeous dining area, the lounge, viewing deck, fire pit and swimming pool areas – the 20 extremely spacious guest suites all have unrivalled views out over the Selati river and the lush forest on its opposite bank. Given that there are very few lodges in South Africa looking out over permanent water, Abelana River Lodge has massive appeal just for the unique views alone!

It’s even better news then that the quality of the lodge and its accommodation fully matches the splendour of the lodge’s spectacular location. Each suite boasts wall to ceiling glass doors that filled the rooms with glorious natural light and enhance the feeling of spaciousness. The gorgeous suites open out onto your own secluded, private hardwood timber deck overlooking the river (complete with outdoor shower of course!), where hippos provide endless hours of entertainment with their antics and noisy snorting. About the only things missing here (if we were to be ultra-critical) are private plunge pools as found at the very top-end game lodges – then again, that would then no doubt elevate the lodge’s very reasonable pricing above what most South African’s would be able to afford, so perhaps we shouldn’t mention it!

The rooms are superbly styled and manage to present a wonderful blend of chic, organic African décor, exquisitely crisp white bedlinen and contemporary, modern design. The colour palette is largely neutral with punches of monochrome patterning and rich, earthy tones. It might sound a bit dull, but it isn’t – instead the suites are stylishly elegant, with the use of organic elements like beadwork, natural woods and rich, tribal textiles adding to the visual and tactile appeal! Take for example the rust-coloured leather headrests, or the bedside tables made from upcycled tree trunks which sit beneath suspended, hand-beaded bedside lights. Not to forget the wonderfully romantic ambience lent by the soft mosquito net suspended from the open thatched ceiling which cocoons the massive king-size bed!

When it comes to the lodge’s public areas, the same attractive contemporary safari-chic styling touches abound. We particularly like the attractive wall niches containing carved African art and which are attractively lit at night, the stunning pebbled feature wall behind the bar, not to mention the carved Nguni cattle heads on the wall. But whilst the décor and styling is absolutely gorgeous, the real star of the show here at Abelana River Lodge is again the stunning view out over the river – whether you’re wallowing in the rim-flow swimming pool, nursing a long cold drink at the bar or relaxing in a comfy armchair soaking up those views, you’ll instantly recognise that you’re in a very, very special place indeed!

Read guest reviews for this lodge. 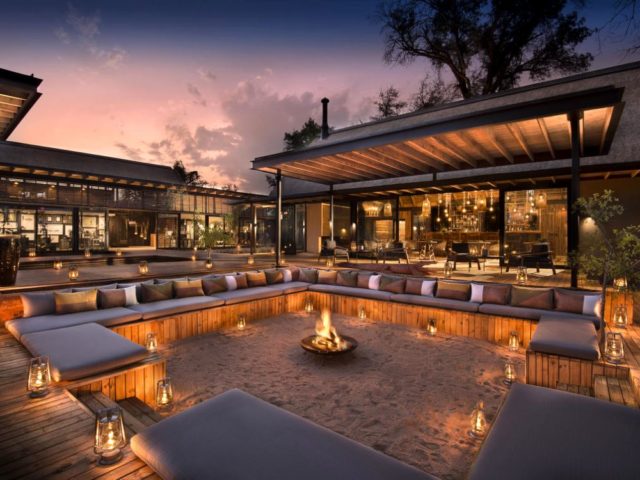 Family owned lodge with a fantastic position on the banks of the Sabie River – even in the dry winter months you’ll enjoy water flowing in the river below you. 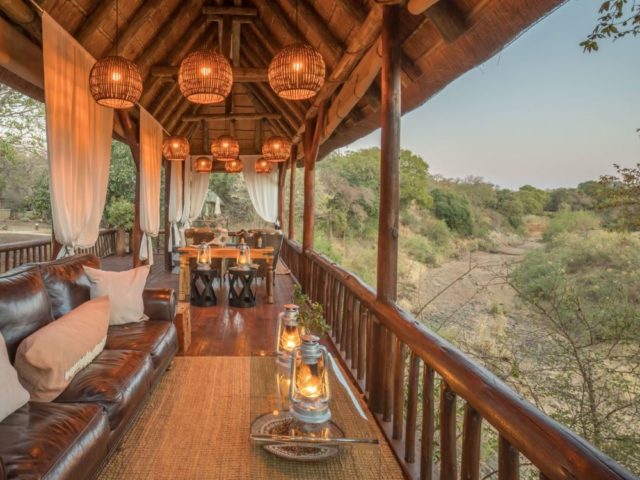 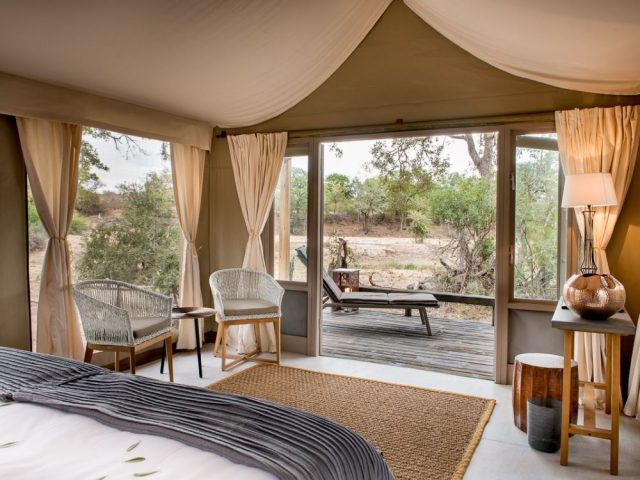 One of our favourite lodges of all with a stunning riverside location with close-up waterhole views -a recent stylish design revamp has just added to its appeal!

Please remove some existing items or send another enquiry with your additional requests.